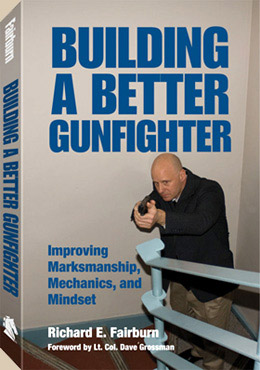 Building a Better Gunfighter is the culmination of Dick Fairburn’s more than 40 years experience as a firearms instructor and researcher of training effectiveness.  Most importantly, Mr. Fairburn’s theories of training have come from his detailed research of more than 200 officer-involved shootings including numerous personal interviews with gunfight winners.  Included in the book are the underlying principals he used to transform a major US police agency’s training program form a marksmanship-based program that performed poorly on the street to a gunfighter-based program that has recently scored 62 percent hits during street fights.

A six hour program that outlines the training, mental preparation and equipment necessary to prevail in the deadly environment a modern gunfight.  Dick Fairburn lays out the cyclic, gunfight-based training program he developed over a 40 year career as a police firearms trainer and researcher.  Using a multi-media approach of lecture, video presentations and research finding, Fairburn covers topics such as assembling, training and leading teams into active shooter incidents.  Important new material is present to help officers recognize ambush situations and employ the tactics necessary to survive such threats.

Led by a Lion is the culmination of Dick Fairburn’s more than 40 years experience as a law enforcement officer and trainer.  As a proven leader of police enforcement and training teams, Dick boils dow street-level police leadership to the essential skills necessary to lead police teams in the dangerous environment of a crictical incident.

A six hour program that outlines the skills, mental preparation and temperament necessary to successfully assemble and lead teams of police responders into the “kill zone” of a critical incident.  The difference between leadership and management – TIME.  Leaders don’t have time to hold a meeting.  Dick Fairburn outlines the scenario-based hands-on police leadership training course he developed at the Illinois State Police Academy that is unlike any other police leadership course in the country.

To purchase books or register for seminars, please the Ordering & Registration page.